Every 3 years the YPC undertakes a recital tour and this year, for the first time, Northern Ireland was the destination. For the first time this meant choir members organising their own flights and meeting up in a Belfast hotel. Amazingly, all went well ( except for some unfortunate airport delays) but by about 10.30pm, all were present and correct.

Our first morning saw a fleet of taxis arrive at the Park Inn to transport us to Belfast's newest and largest tourist attraction 'The Titanic Experience'. Performing in the open, at the iconic and huge 'Titanic' sign beside the main door, we gave a performance which included the 4 traditional Northern Irish songs specially written for the This trip by Alan Simmons, namely Danny Boy, The Mountains of Mourne, Believe me if all those endearing young charms and I wish I was in Carrickfergus.

A large and international crowd gathered complete with cameras, iPhones and the like, receiving the renditions with enthusiasm, so much so that the management relented and invited us to sing inside the immense atrium of the museum (originally forbidden because of H and S rule), where the busy and large morning crowd stood and rewarded us with generous applause.

Following this the whole choir enjoyed the museum's epic presentations with the rest of the day and evening at leisure.

An earlier start was the order of they day for Saturday. At 9.30 am our coach took us from the hotel to the twin Cathedral town of Armagh, where we are due perform a lunchtime recital at 1.00pm. We took the advantage of a lengthy rehearsal to set us up, not just for Saturday but Sunday as well. The Church of Ireland Cathedral, although not huge, has a wonderful acoustic and an excellent organ on which Tom excelled.

Our supporters did a great job of distributing extra advertising leaflets in the hour before our performance, down on the town's Main Street. That, together with the hard work done behind the scenes by the people of Armagh, meant a reasonable crowd gathered and received the recital enthusiastically. Making the most of the glorious acoustic, major works such as Zadok the Priest and I was Glad brought sustained applause, as did our presentation of the entire Little Organ Mass by Haydn, featuring Janette Fraser and Tom Moore in the beautiful ' Benedictus'.

The audience feedback was excellent as was their response to buying our CD's. Well done everyone. The rest of the afternoon was devoted to enjoying Armagh, before returning to the hotel with the option of gathering in the bar later prior to eating somewhere. As it turned out 34 of us enjoyed an impromptu time in the hotel.

Sunday dawned bright and fair, tempting many to take the 20 minute walk across town to St Anne's Cathedral. The remainder arriving in style by taxi. This was to be a busy morning, replacing the cathedral choir for morning Eucharist following on with another recital. There was some concern about all the requirements of the service, but as always the YPC rose to the occasion and did not ( literally) put a foot wrong, allowing the well attended worship to soar as intended. The service commenced with Pitoni's Cantate Domino and included parts of The Little Organ Mass as well as Cantique de Jean Racine during the administration of communion. After only a 15 minute gap in which even more people joined the audience and the Cathedral opened its doors to the many tourists enjoying the city, the choir reformed to present the concert.

If Armagh was relative small, St Anne's Belfast is huge, could we fill he place with sound... You bet, what a sound we made and what a fantastically received concert. The closing strains of I was Glad we're met with a sustained standing ovation, bringing a lump to many a YPC throat and making us feel really rather humble. With the encore strains of John Rutter's 'The Lord Bless You and Keep you' gently floating above us, we sang our last note of performance for the trip.

After an informal photo on the Cathedral steps the rest of the day was again ours to enjoy the many delights of Belfast.

Our last day, Monday, was a day to relax on our coach trip to the north coast and The Giants' Causeway. What a spectacle and what a great time we enjoyed, completed by a return trip down the beautiful Antrim Coast Road, guided by Brian our driver ( who turned out to be a tenor in his local choir). We completed our route, by request, in Carrickfergus, just so we could see the place we had sung about. It's safe to say the song is probably better than the place, but isn't that usually the case?

Monday evening saw us enjoying our Choir Dinner at the nearby Radisson Blu, followed by homegrown entertainment from some very talented and brave people. It included some great laughs and was a fitting, enjoyable end to our time away together.

Somehow words can't possibly begin to do justice to explain what a great trip this has been, probably, some say, the best we have done. Sometimes because of the cost of such trips or the time and effort in organising, you wonder whether we should carry on doing them, I think without doubt everyone who went on this trip would only have one response..... Bring on the next one, we'll all be there. 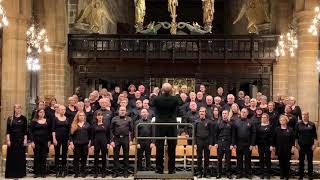